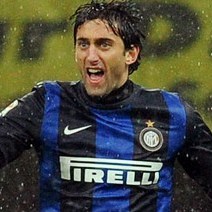 Inter Milan moved up to second in Serie A with victory over nine-man Sampdoria at the San Siro.

The hosts trailed 1-0 at half-time, but came back strongly after the break as their opponents lost their discipline.

Gianni Munari put Samp in front in the 20th minute, but the game turned early in the second half when Andrea Costa was sent off for a foul on Diego Milito in the area and the Argentinian levelled from the spot.

Rodrigo Palacio made it 2-1 in the 69th minute and Fredy Guarin added a third nine minutes from time.

Samp then lost their discipline as coach Ciro Ferrara was sent to the stands and substitute goalkeeper Tommaso Berni was also shown a red card, both for dissent.

The visitors still managed to pull one back in the last minute through Citadin Eder, but it was too little too late. The win moved Inter above Napoli into second and kept them four points behind leaders Juventus. Lucio On The Verge Of Signing New Inter Milan Contract