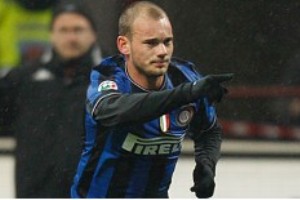 Wesley Sneijder and Walter Samuel scored late goals as defending champions Inter Milan twice came from behind to avoid a shock Serie A loss to Siena in the top-versus-bottom clash at the San Siro.

Mourinho was staring at a first home loss in the league for almost eight years – he was unbeaten in his final season at Porto, throughout his time at Chelsea and in his first season in charge of Inter – before the late interventions of Sneijder and Samuel’s winner.