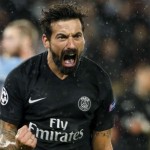 Lavezzi is off contract at the end of this season and has been linked with Arsenal, Chelsea and Manchester United.

Inter are also keen and Mancini admits the striker would be a welcome addition.

“Lavezzi? He can bring a lot to a young team like ours: he is a very strong striker, full of maturity and he is a modern player,” said Mancini.

“For the moment I do not think he can come, since he has a contract with Paris Saint-Germain.”