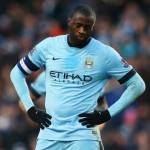 The Italian worked with Toure at City and is keen on a reunion.

“Yaya is one of the strongest players in the world,” Mancini told Il Giornale. “He still is.

“He has played in so many teams. He has been in leagues in Belgium, Russia, Spain and England. Italy is the one missing. This could be the right opportunity for him to come and try.

“We are building a team. There are players that change the look of a team, and Yaya is one of them.

“Next year we could try. We need to bring three champions, and we will see that we will be ready to fight for the Scudetto.”