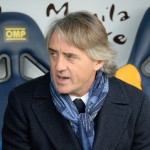 Reports are out claiming that Arsenal are believed to be showing interest in Roberto Mancini.

According to Corriere dello Sport, Gunners chiefs have cast an eye over the Inter Milan boss as they ponder what could be next in North London.

There are constant murmurings that Arsene Wenger could be shown the door after 20 years with the Gunners and it is being suggested that Mancini is a potential candidate.

Mancini, 51, parted ways with Manchester City in the summer of 2013 having guided the club to their first Premier League title in 2012 as well as the FA Cup triumph in 2011.

He has since spent time at Turkish giants Galatasaray and is currently overseeing a Nerazzurri side that sits fifth in Serie A, 15 points off leaders Juventus.

Wenger’s tenure at the Emirates Stadium continues to be questioned and the microscope is expected to be further placed over the club if he fails to deliver the Premier League title this season, which looks unlikely at this stage with Leicester City sitting 11 points clear.

If that is the case, and he comes away empty-handed again, the club hierarchy could well be forced to make a change at the top which will likely open the door to a number of high-profile applicants.