It has been reported that Inter Milan chief Piero Ausilio has defended the scratchy form of Nemanja Vidic. 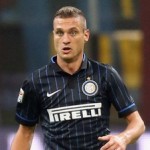 The 33 year old former Serbian international centre back has struggled to settle in Serie A since his summer arrival from Manchester United.

However Ausilio insists: “I do not think we can take issue.

“To take him on a free was a huge hit. He arrived at Inter and has had to adapt to the system and the Italian championship.

“He will demonstrate during this three-year contract his value. He will adapt quickly and then live comfortably. We are convinced that he will do fine with Inter.”

Marko Arnautovic To Be Given Last Chance By Inter Milan Inter Milan To Announce The Signing Of Gary Medel