It has been reported that Javier Hernandez is edging closer to a Manchester United departure. 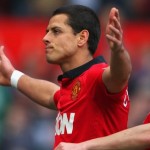 The Daily Express claims that reports in Italy suggest that Inter Milan want to take Hernandez to Serie A on loan but would have the right to buy the Mexican hitman at the end of the season for £10m.

It has even been suggested that Nemanja Vidic – who joined Inter on a free transfer this summer – has been instrumental in trying to persuade Hernandez to make the switch.

The Nerazzurri are keen on an agreement before the World Cup.