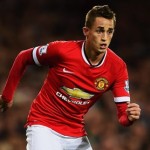 Reports are out claiming that Inter Milan are in talks with Manchester United winger Adnan Januzaj.

Sportmediaset says Inter football chief Piero Ausilio has made their first move, opening talks with Januzaj’s father, who also acts as his agent, to register their interest.

Inter already enjoy good ties with United, with former captain Nemanja Vidic on the books and Michael Bolingbroke having left the Premier League giants for a front office job with the Nerazzurri this season.

Ausilio wants to take the Belgian on an 18-month loan.

If a deal for Januzaj cannot be struck, Inter will turn to Chelsea winger Mohamed Salah.