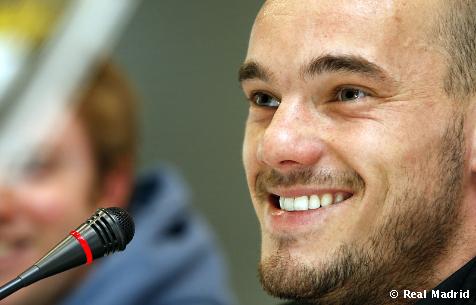 Latest transfer news are out from Italy and it has been reported that Real Madrid and Dutch international midfielder Wesley Sneijder is reported to be on the verge of joining Italian champions Inter Milan.

The Holland international midfielder is now surplus to requirements at the Bernabeu following the big-money signings of Cristiano Ronaldo and Kaka and has been linked with a move to the Italian champions for several weeks.

Inter coach Jose Mourinho is known to be in the market for an attacking midfielder who can play at the head of his midfield diamond formation and now seems to have got his man.

Local newspapers in Italy has reported that the agreement between Inter Milan and Sneijder is imminent and the Dutch midfielder is expected in Italy in the afternoon to finalise the deal’s last details and then the Nerazzurri will be able to make the official announcement.

If Sneijder, now age 25, does join Inter Milan, he will complete an impressive set of acquisitions during the off-season by Mourinho, who has already added Samuel Eto’o, Diego Milito, Thiago Motta, Lucio and Marco Arnautovic to his squad.

The first four of those all started as Inter were held to a disappointing 1-1 home draw against newly-promoted Bari on Sunday.