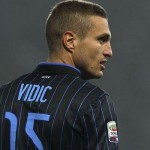 Reports are out claiming that Inter Milan defender Nemanja Vidic has again been linked with a return to Manchester United.

Tuttosport revealed that Vidic is considering leaving Inter in the January transfer window after failing to cement a place in new boss Roberto Mancini’s first team.

The former Red Devils last appeared for the Nerazzurri at the start of November and he is reportedly unhappy at his lack of opportunities.

It emerged last month that United boss Louis van Gaal is considering a shock move for Vidic, who was at the club for nine seasons before leaving on a free transfer this summer. AS Roma To Rumble Man Utd Plans For Christian Benteke