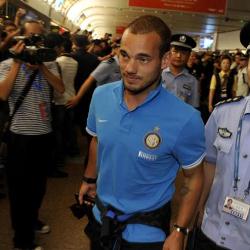 Sky Sports has reported that Manchester City have not agreed a deal for Wesley Sneijder, contrary to reports in Italy,.

Gazetto dello Sport suggested that the Premier League club have snatched the Inter Milan midfielder from under the noses of rivals Manchester United, who had been favourites for the Dutchman’s signature.

They suggested that the Dutch international will feature in Inter’s Italian Super Cup meeting with AC Milan in Beijing before jetting to England to sign an alleged agreement with City.

There appears to be no truth in the revelation, and Inter have repeatedly denied talks are being held with any Premier League club.