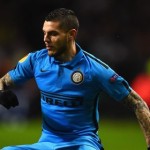 Reports are out claiming that Inter Milan are set to break the hearts of a number of clubs by securing Mauro Icardi to a new contract.

The 22-year old Argentine striker has attracted the interest of Premier League giants Chelsea, Arsenal and Manchester City but Inter general director Marco Fassone suggests the Italian club are closing in on a fresh deal.

“We are almost there with respect to Icardi’s contract extension,” he told Tuttosport.

Fassone added that Mateo Kovacic, who is a target for the Gunners and Liverpool, is also very much a wanted player at the San Siro.

“We want to keep him just as we want to keep [Mateo] Kovacic. We will evaluate with great care [their] eventual offers,” he added.

Arsenal Miss Out On Windfall Thanks To Barcelona Failure This Season