Reports are out claiming that Inter Milan are interested in Manchester City striker Alvaro Negredo. 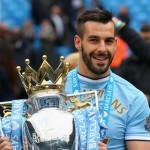 Sportmediaset reported that the Italian giants are in the market for a new centre-forward and have asked City about Negredo’s availability.

Negredo is also wanted by Atletico Madrid as they prepare to lose Diego Costa to Chelsea.