It has been revealed that Inter Milan are eyeing Manchester United winger Adnan Januzaj. 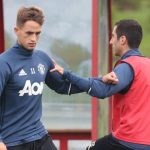 The Belgium international made seven appearances in the U21 Premier League last season – two more than he managed in the actual top flight.

Inter have lined up a deal for the Belgian after facing difficulties in their attempts to sign Joao Mario and Antonio Candreva.

The Italian club will reportedly look to loan Januzaj for the 2016/17 season with a clause to buy him permanently for £5.8million next summer.