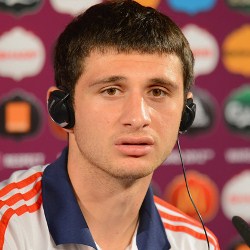 It has been revealed that Inter Milan GM Marco Branca has confirmed their interest in CSKA Moscow winger Alan Dzagoev.

The 22 year old Russian international has been linked with a move away from CSKA this month.

Premier League clubs Arsenal, Tottenham and Chelsea are keen, while Branca revealed: “We follow all the Russian players. We have followed the market in a curious way because there are players that interest us.

“Will we buy him? It’s too early to talk about these things, but in the future everything is possible …”

Cambiasso Confident Inter Milan Will Bounce Back From Roma Defeat