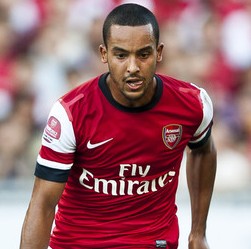 Reports are out claiming that Inter Milan and Juventus are monitoring Theo Walcott’s new contract talks at Arsenal.

The England international star is the latest Gunner whose deal expires at the end of the season and could follow Robin Van Persie out the door.

“We are still trying to extend his deal,” manager Wenger told The Sun.

“When a player doesn’t want to stay, you either force him or you let him go.”