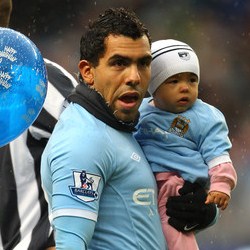 According to The People, Inter Milan coach Leonardo is desperate to land the the Argentine international who bagged a first-half hat-trick to seal City’s 3-0 win over West Brom yesterday.

It is believed that Leonardo his expressed his wish to Inter president Massimo Moratti and the Italians are now setting aside £25m in transfer funds in a bid to land him and may allow a player to move in the opposite direction.

Manchester City on their part will be desperate to hold on to the former Manchester United ace but a failure to land silverware this term could be enough to convince Tevez to move on.

His girlfriend Brenda Asnicar, 19, is an actress and has recently received offers to become a TV presenter in Italy.