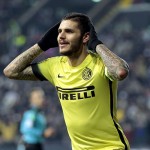 Reports have emerged claiming that Inter Milan are prepared to sell Mauro Icardi this summer.

Icardi attracted enquiries from Manchester United in January and they’re sure to be on notice over this latest development.

The report claims Antonio Conte and Jose Mourinho, who are expected to replace Guus Hiddink and Louis van Gaal respectively, both want to bring Icardi to the Premier League.

Icardi has scored 11 goals in 25 appearances this season but has failed to break into the Argentine national team. Roy Keane Insists David Moyes Should Have Been Given More Time