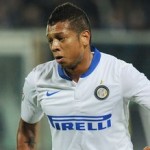 It has been reported that Inter Milan have informed Manchester United they can sign Fredy Guarin this summer.

It is said that the Premier League giants are in desperate need of central midfield reinforcements following last seasons disastrous campaign.

Corriere dello Sport says United could pick up Guarin for as little as £12m if they decide to firm up their interest.