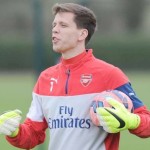 The Daily Star Sunday reported that Inter coach Roberto Mancini has set his sights on a summer bid for Szczesny after learning Samir Handanovic, 30, is likely to move on.

Arsene Wenger finally ran out of patience with the Polish keeper, 24, after a horror display in the loss at Southampton in January was followed by a row over smoking.

David Ospina has since stepped in and is growing in stature with every game.