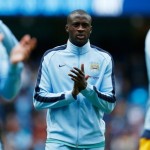 Reports are out claiming that Inter Milan are stepping back from negotiations with Manchester City midfielder Yaya Toure.

Inter coach Roberto Mancini has stated publicly that he wants to be reunited with his former City star.

However, Calciomercato.com says Inter directors have been left unimpressed by the behaviour of Toure and his agent in recent days.

Indeed, Dimitri Seluk stated earlier this week that he expected Toure to now stay with City.

Mancini remains hopeful, however, and is prepared to takeover negotiations himself to get a deal over the line.