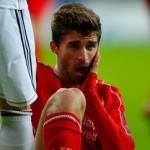 The Daily Star reported that QPR and Sunderland both tried to sign him during the summer transfer window and despite agreeing fees with Liverpool, they were rebuffed by the Italian striker.

According to reports in Italy, Serie A giants Inter are now in pole position to sign Borini on a permanent deal despite Fiorentina’s interest.

Liverpool are understood to be unwilling to loan him out and would rather cash in but Borini, who started in Tuesday’s Champions League defeat Real Madrid, is thought to be desperate to prove himself at Anfield.