Reports are out claiming that Inter Milan are ready to swoop for Tottenham defender Toby Alderweireld. 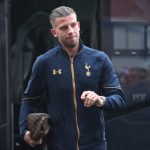 Inter are planning to rebuild their defence this summer.

Kyle Walker is also on the radar of Inter Milan, as Mauricio Pochettino faces something of a crisis with two of his star defenders on the brink of leaving the club.

But Alderweireld is the No1 target, with the comparatively low £25m release fee.