Reports are out claiming that Inter Milan are ready to make a Bosman offer to PSG striker Ezequiel Lavezzi. 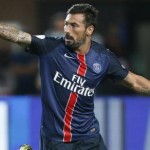 The Argentine international’s deal with PSG expires in June and he accepts this will be his last season in Paris.

The former Napoli striker favours a return to Italy and is a regular visitor to Milan.

Tuttosport claims that Inter plan to make a pre-contract offer to Lavezzi in January, but will face competition.

Carlo Ancelotti Has Pop At Rafa Benitez over Karim Benzema