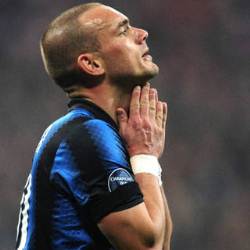 Wesley Sneijder is convinced that he will be sold by Inter Milan in the coming days.

Manchester United and Manchester City are reported to be chasing the Dutch international star.

The former Real Madrid star refused to speak to the Italian newspapers after the 2-1 Italian Super Cup defeat to Milan, but was quoted in Holland.

Sneijder told Voetbal International : “I only know Inter need money and I could leave if the right offer comes in,”.

“I have a five-day holiday after Wednesday’s friendly against England and I hope the issues regarding my future can be clarified during that time off.

“I am proud to hear both United and City are interested in me, but so far I have not had contact with either club.

“When it comes to my future, that is all I can say.”