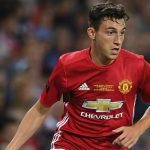 Reports are out claiming that Inter Milan still have Manchester United fullback Matteo Darmian on their shopping list.

The Nerazzurri are set to make a move for the player when the transfer window reopens in January.

And the Serie A club are also believed to be keen on Barcelona right-back Aleix Vidal, who could leave the Nou Camp if the Catalans follow up their own interest in Juventus’ Stephan Lichtsteiner in the new year.