Reports are out claiming that Inter Milan are lining up a bid for Manchester United striker Javier Hernandez. 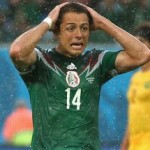 The Daily Express reported that the Italian giant remain in the market for a new striker this summer and had identified Fernando Torres, Erik Lamela and Stevan Jovetic as their top targets.

But having been rebuffed by Chelsea, Spurs and City, Inter believe they may have more luck when it comes to Hernandez.

Louis Van Gaal has said he may take up to four weeks to assess his Manchester United squad but it is thought that Hernandez is high on the list of players that will be allowed to leave.

Reports in Italy suggest that Inter will now approach United about an initial season-long loan move – for a fee in the region of £1.5m – with an option to buy the Mexican outright for £9.5m next summer.