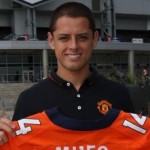 The Italian giants are desperate to sign a new striker this summer to give Walter Mazzarri more firepower up-front and United’s Mexican hit-man fits the bill.

Louis van Gaal is keen to bolster his midfield and is scouring the market following the blow that Arturo Vidal is not interested in a move to Old Trafford.

Guarin is one player who the Dutch boss has kept tabs on and the Serie A club believe swapping the Colombian for United’s fringe striker will work for both parties.