Reports are out claiming that Inter Milan have made contact with Manchester City striker Stevan Jovetic. 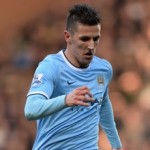 The Montenegro international is a favourite of Inter coach Walter Mazzarri and talks were held with his agent on the weekend.

For the moment, both Jovetic and City have no plans to part ways.

However, Inter will try again later in the summer with the proposal of taking Jo-Jo on-loan should the prospect of regular first team action at City appear remote.