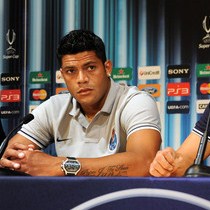 Reports have surfaced that Inter Milan are eyeing Porto star Hulk for the January market.

Tuttosport revealed that despite the arrivals of Diego Forlan and Mauro Zarate, Inter management feel they still haven’t adequately replaced Samuel Eto’o since his departure to Anzhi.

Hulk’s agent revealed only this week enquiries from Arsenal.

Inter are now discussing the prospect of moving for the Brazil international to boost their attacking options in the second-half of the season.