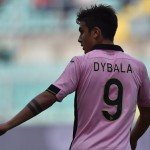 Speaking after victory over Lazio, Mancini confirmed their interest.

“Dybala is a Palermo player, he’s interesting to us but also to other teams,” said Mancini.

“I do not know what will happen.”

The talented striker is also wanted by Arsenal and Juventus.