Reports are out claiming that Inter Milan are keeping tabs on PSV Eindhoven winger Memphis Depay. 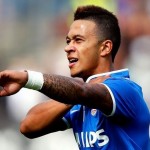 The Holland international was a revelation at the World Cup this summer and has taken his form into the new season.

Linked with the likes of Real Madrid, Tottenham and Manchester United, Depay penned a new deal with PSV last month.

Inter have made contact with Depay’s camp this week with the view to moving for the youngster in January.

Nerazzurri powerbrokers Erick Thohir and Piero Ausilio are keen to spend big money only on players with the potential to sell on for a profit – and Depay fits the bill. Manchester United To Be Low Key In The January Transfer Window