It has been reported that Inter Milan have not dropped their interest in Tottenham winger Erik Lamela. 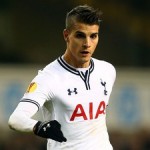 The Daily Star claims that the Italian giants are ready to test the resolve of new Tottenham manager Mauricio Pochettino and make a second bid for Lamela.

The Nerazzurri made an attempt for Lamela before the World Cup.

However, the Argentine has indicated he wants to play for Pochettino at Spurs and was front and centre for the first day of preseason on Saturday.