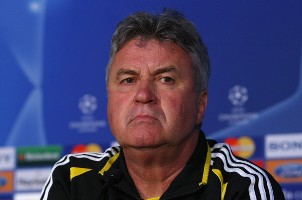 Former Chelsea manager Guus Hiddink is being linked with the Inter Milan job.

Italian newspapers report that with Jose Mourinho’s move to Real Madrid now confirmed, the battle to replace him is a two-horse race between Hiddink and England boss Fabio Capello.

Hiddink has only just taken over the reigns of the Turkish national team, but Inter president Massimo Moratti has seen the club’s coffers swell by €100 million thanks to their Treble winning campaign and buying the Dutchman out his contract won’t be a problem.

Despite his commitment to international football, Hiddink’s reputation at club level remains high thanks to his six months in charge of Chelsea last year.