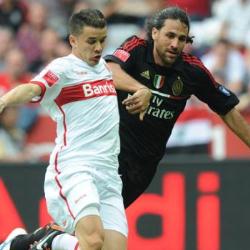 Internacional claimed third place with another penalty shoot-out victory over AC Milan after the game finished 2-2 in normal time.

Milan had twice led through Zlatan Ibrahimovic and Alexandre Pato, but Leandro Damiao and substitute Andres D’Alessandro both grabbed equalisers.

Milan then suffered in the shoot-out, missing all four of their kicks to lose it 2-0.