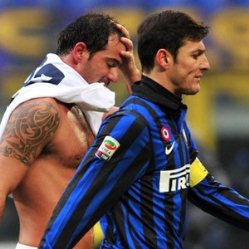 Serie A’s basement side Novara pulled off one of the surprises of the season by beating Internazionale 1-0 at the Giuseppe Meazza.

Andrea Caracciolo’s 51st-minute strike was enough for the visitors to secure only their third league win of the campaign, their second against the hosts.

The home side had plenty of possession but were lacking in ideas, instead choosing to bombard the biancoazzurri box with crosses into the box which were met by a resilient defence.

Wesley Sneijder’s 88th minute shot was the closest Inter came to equalising, when he hit his strike against the underside of the crossbar from the edge of the Novara area.

Giampaolo Pazzini also had a chance deep into stoppage time, when his attempt was fired straight at goalkeeper Samir Ujkani.

Inter have now gone four games without a win in Serie A, and will drop down to sixth if Roma beat Siena on Monday night.

Jack Wilshere In Action For Arsenal U21 Against Everton – Video