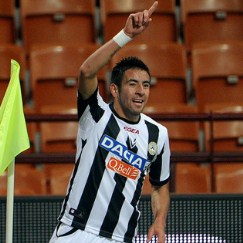 Mauricio Isla scored the only goal 17 minutes from the end of a dramatic game which saw both teams miss penalties inside the final 10 minutes and finish the game a man light.

Inter’s Javier Zanetti was first to see red when he gave away a penalty which was saved by Julio Cesar, while Damiani Ferronetti followed him into the dressing room five minutes later having moments earlier conceded a penalty which Giampaolo Pazzini missed at the other end.

Inter’s sixth defeat of the season sees them fall 13 points behind Udinese, who join Milan on 27 points at the summit but stay second due to inferior goal difference.