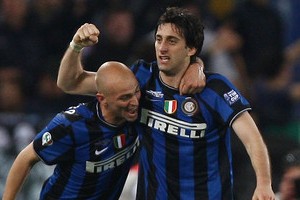 Inter Milan clinched the first trophy of a potential treble-winning campaign with a lone Diego Milito strike against Roma.

Roma ended the game down to 10 men after substitute Francesco Totti was sent off for a second booking in what was a sombre night for the Giallorossi in their own Stadio Olimpico.

Inter will now take aim at Champions League glory with a final date against Bayern Munich in Madrid later this month.

They also lead Roma by two points in Serie A heading into the final two weeks of the season.