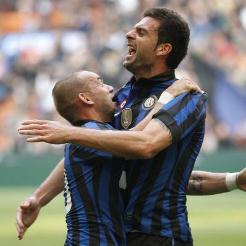 Inter Milan recorded only their second Serie A victory of the season after easing past Chievo 1-0 at the San Siro.

Thiago Motta struck a 34th-minute winner as Inter finally gave their fans something to celebrate having failed to win in their previous four home matches in all competitions and having lost four of their six games in Serie A this term.

The result lifts Inter onto seven points but still leaves Claudio Ranieri’s men struggling at the wrong end of the table, while Chievo are two points better off after seeing their four-match unbeaten run come to an end.