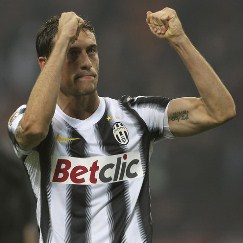 Juventus retained their two-point advantage at the top of Serie A and piled even more misery on Claudio Ranieri’s Inter Milan with a win at the San Siro tonight.

Mirko Vucinic put the Bianconeri in front in the 12th minute, but Maicon levelled for the hosts in the 28th minute.

Claudio Marchisio restored Juve’s advantage in the 33rd minute and he was unlucky not to earn a penalty just before half-time.

Inter were unable to find a way back into the game and succumbed to their fifth defeat in nine games to risk dropping into the bottom three of Serie A this weekend.