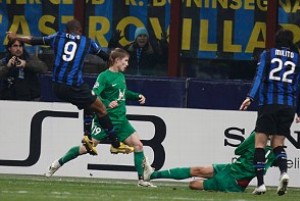 Samuel Eto’o fired Inter Milan to a 2-0 win over Rubin Kazan that puts them in the knockout stages of the Champions League.

Eto’o ended his goalscoring drought in the competition this season when he struck in the 31st minute to give the Italians the lead.

Mario Balotelli’s powerful free-kick made it 2-0 shortly after the hour mark. Rubin never gave up and were unfortunate not to come back into the game in a dominant early second half, but just could not find their way to goal and have to settle for a place in the Europa League as consolation.