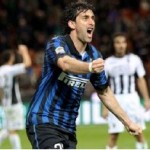 Diego Milito scored twice as Inter Milan snatched a comeback win to bolster their European bid at home to Siena.

The visitors continued their improved recent form when they took an eighth-minute lead through Gaetano D’Agostino only for Milito to level on 42 minutes.

The Argentina striker then grabbed the winner from the penalty spot on 81 minutes after substitute Yugo Nagatomo was felled in the area.

Siena’s night got worse in injury time when goalkeeper Gianluca Pegolo was dismissed for his protests with the referee.

The win moved Inter two points behind the Europa League places while Siena, who had strung back-to-back wins together, are still in the relegation picture with a five-point gap on the bottom three.