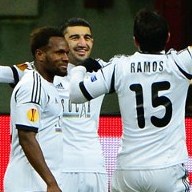 Teenage striker Marko Livaja struck twice but a youthful Inter Milan signed off from the Europa League group stage with a 2-2 home draw against Neftchi at the San Siro.

Nicolas Canales stole a share of the points for the Azerbaijan side two minutes from the end to punish Inter’s profligacy.

With second place in Group H already tied up boss Andrea Stramaccioni made seven changes as he gave a run-out to a host of his youth team players.