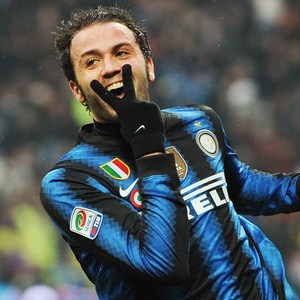 Substitute Giampaolo Pazzini scored twice and won a penalty on a dream debut as Serie A champions Internazionale roared back from 2-0 down to beat visiting Palermo 3-2 on Sunday.

In one of the best matches of the season, fourth-placed Inter found themselves trailing to first-half goals from Fabrizio Miccoli and Antonio Nocerino despite dominating.

Pazzini, signed on Friday, was thrown on at the break and soon scored with a superb turn-and-shot before Palermo’s Javier Pastore had a penalty saved by fit-again Julio Cesar.

Leaping like a salmon for a trademark goal, Pazzini then planted a bullet header into the bottom corner from Maicon’s free kick and Samuel Eto’o completed the victory from the spot 14 minutes from time after Pazzini was pulled back.