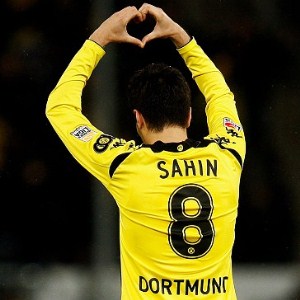 German-born Sahin is both the youngest ever Bundesliga player, making his debut in August 2005 aged 16 years and 355 days, and the youngest scorer, netting against Nuremberg three months into his top-flight career.

He made his Turkey debut in 2005 in a 2-1 win over Germany in Istanbul, becoming the youngest player to score for his country when he made it 2-0.

Sahin played a total of 135 matches for Dortmund and scored 13 goals, including six this season as the German club claimed their first Bundesliga title since 2001-02.

Some say that Sahin is signed as a direct replacement for Brazilian midfielder Kaka who is continuously linked with a return to AC Milan.

Whatever the case may be, Real Madrid have begun their quest to topple Barcelona next season who is on course to complete the double with the La Liga title and the Champions League this season.