Reports are out claiming that Arsenal midfielder Ainsley Maitland-Niles enjoyed a tidy home debut for Ipswich Town in their draw with Sheffield Wednesday. 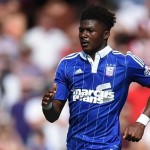 Maitland-Niles was used across the midfield during the game, playing wide right, left and also through the middle.

McCarthy says loan wingers Ryan Fraser (Bournemouth) and Maitland-Niles have given his team another dimension: “Haven’t they just? It’s just a shame they’re not ours. But they are for a year. And let’s hope we can made the most of them. At the minute we are are.

“I think they’re both outstanding talents and it’s lovely that we’ve got them, so thanks to both clubs for letting us have them.”