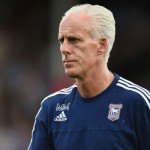 McCarthy’s Tractor Boys travel to Old Trafford to take on van Gaal’s Red Devils in the Capital One Cup third round on Wednesday night and the Irishman is excited.

McCarthy guided the Republic of Ireland to a famous 1-0 win over Holland back in 2001 in a 2002 World Cup qualifier, getting the better of van Gaal despite having 10 men for much of the encounter.

Ahead of this week’s battle in England, McCarthy admitted he would love to get another one over the Dutchman who questioned the Ipswich manager’s employment prospects almost 15 years ago.

“I was absolutely f***ing delighted to win that one. It was a great day for me and Ireland,” said McCarthy.

“We won 1-0 despite the fact we were down to 10 men for about 40 minutes. It set me up for one of the highlights of my career, managing at the World Cup.

“Before the game I was getting annoyed because they were booking their hotels and it was supposed to be us that were going out.

“I was an angry young man then and I’m more pragmatic now but I still look forward to pitting my wits against him.”