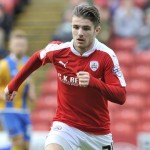 Reports are out claiming that Martin O’Neill is eager for promising Arsenal youngster Dan Crowley to pledge his allegiance to the Republic of Ireland.

The Coventry-born 18-year-old midfielder has represented country of birth England as well as the home country of his father and grandparents, Ireland, at youth level and still remains eligible for either.

Crowley has been making strong progress in Arsenal’s academy, following a loan spell with Barnsley earlier this season, and O’Neill believes he would add plenty to his senior Ireland setup.

The Irish Independent claims that O’Neill has held face-to-face talks with Crowley who last year returned to play for the England U19 team after representing Ireland’s U17s.