Reports are out claiming that the ex-girlfriend of Real Madrid star Cristiano Ronaldo has defended him over his birthday party. 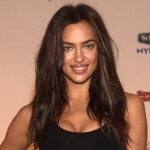 The former Manchester United star has been hammered by fans over the timing of his 30th birthday party, just hours after the derby defeat to Atletico Madrid.

Irina Shayk leapt to his defence during a Sports Illustrated event.

Asked about the criticism, Irina labelled it “unfair”.

The pair split earlier this year.