Reports are out claiming that Arsenal midfielder Francis Coquelin has revealed the ease of playing next to Santi Cazorla. 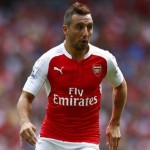 The duo have formed a strong working relationship for the Gunners in the centre of midfield and Coquelin has praised his more experienced teammate for making his job that much more effortless.

Coquelin told Arsenal Player : “It is easy to play alongside Santi because he is such a great player,”.

“We had a good chemistry last season, but there are many great players at this club that we can all play with each other.

“That is the great thing about this squad; anyone can play and we can still get a result.

“Last season with Santi was something special because we got a lot of praise, but the most important thing is that no matter who plays, we can get the result.”

Arsenal next meet Liverpool at the Emirates Stadium on Monday night. Arsenal Defender Per Mertesacker In Line For Stoke Return